We’re heading out for our summer tour! Come hear us! We’re playing a mix of dances and concerts, and we’ll share a lot of music from our new CD (to be released this autumn)!

We’d love to meet you for a cup of tea or coffee and share a tune or two as well as seeing you at the performances. Let us know!

More information for each event is available in the Google Calendar links on the right side of the page; on our Facebook group, or by emailing booking [at] frostandfireband.com . We hope to see you there!

Looking further out, you’ll also find us in:

Lots of chances to hear us play this weekend! We hope to see you out there!

More details about all these events on our Google Calendar — you can find it in the sidebar of this site. See you soon!

We’re going to play the Brattleboro, VT contra dance on Sunday, January 13th on our way home from our NYC tour with Mary Wesley. She’ll call for us in Brattleboro…

… and in Burlington! We’ve just learned that Mary will be our caller for the First Night Burlington contra dance. Lots of Mary/Frostie time this winter! We’re also excited to join Peter Johnson at the Burlington Queen City contra in November.

We hope to see you on the dance floor!
— Hollis, for the Frosties

Reporters from the New York Times stopped in to visit when we played the Montpelier, VT Capital City Grange dance in July, and they snapped this picture of us with Rebecca Lay, Darren Schibler, and a whole lot of happy dancers! 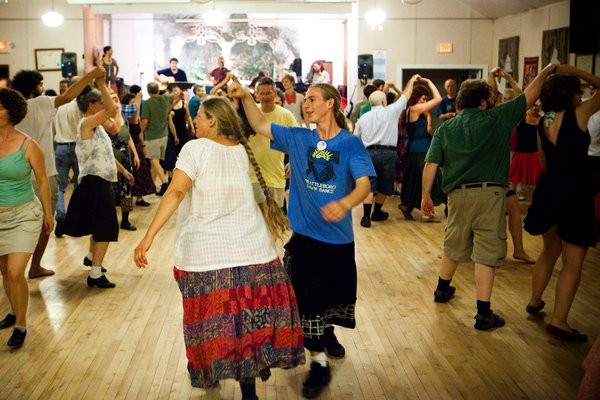 Credit: Piotr Redlinski for The New York Times. Original photo and article are available at NYTimes.com .

We’re thrilled to announce that Frost and Fire will be playing the contra dance at Burlington’s First Night this year. Join us from 7-9 at Memorial Auditorium to balance the old year and swing into the new! We’ll let you know once we hear who the caller will be.

We love you! We couldn’t do this without our fans, and it’s fan-tastic to see so many of you at all of these performances. Thanks for helping us!

— Hollis, for the Frosties

We hope you’ll join us for a concert performance at the Ripton Community Church on Friday, June 1, 2012! We’re thrilled to perform in the newly-renovated space at the Church–among the previous performers there was US Poet Laureate Robert Frost. We’ll fill it with fiddles and flute, pipes and piano, banjo and bass voice.

Admission is $10; Call 388-1062 or 388-1634 for advance tickets. We recommend reserving tickets as early as possible since space is limited and our last concert sold out almost immediately. The concert starts at 7 pm.

We hope to see you there!

We’re also looking forward to upcoming contra dances in Montpelier and Burlington (both in Vermont), a highland games in Quechee, VT, and our fall/winter dance tours to Ottawa, Montreal, and New York city. We’re so glad to have the fans out there helping us find places to play!

The band Frost and Fire, having taken the local contra
dance scene by storm in recent months, will be presenting an intimate
acoustic concert in the historic setting of the Rokeby Museum.

Frost and Fire will present traditional Celtic and New England music,
together with many of their original tunes. Be prepared for infectious
enthusiasm, consummate musicianship and luscious arrangements, not to
mention the skirl of the pipes. The line-up includes Addison residents
Viveka Fox (fiddle & percussion) and Peter Macfarlane (fiddle, low
whistle & vocals) of the well-known local band Atlantic Crossing. They
are joined by Aaron Marcus from Montpelier (piano, concertina, banjo,
vocals & feet) of The Turning Stile and Giant Robot Dance, and Hollis
Easter from Potsdam, NY (flute, whistles, bagpipes, guitar & vocals),
formerly of the National Youth Pipe Band of Scotland. All four
musicians are inspired by the joy of sharing the music which they
love.

Perched on a hill overlooking the Champlain Valley, Rokeby Museum
provides an intimate record of two centuries of Vermont family life
and agriculture. It was home to four generations of Robinsons—a
remarkable family of Quakers, farmers, abolitionists, authors, and
artists. Today, listed as a National Historic Landmark, the site tells
two stories simultaneously — of the Robinsons in particular, and more
broadly, of Vermont and New England social history from the 1790s to
1961. Caretaker of the Rokeby Museum is none other than contra dance
caller extraordinaire Mary Wesley!

Space at Rokeby is limited to 40 guests. To reserve seats for this
concert, please e-mail Peter at petermac@gmavt.net and let him know
how many seats you want and the names of all guests in your party.

We hope you’ll join us for some great music in a lovely setting, and we look forward to seeing your faces and talking with you after the show!

We’re pleased to announce a pair of new dances. We’ll be playing the English dance in Colchester, VT on January 20th, and we’ve also been asked to play for Montpelier’s dance series on July 7th.

Hi folks! We’ve got a couple of new gigs coming up in the greater Burlington area–hope to see you soon!

We had a a fantastic time on Friday night in Burlington, VT! Many thanks to all the dancers who packed the hall on a busy Friday–it looked like there wasn’t much room on the dance floor!

Here are some video clips and pictures of the dance. We had a great time!

(Hollis hopes that next time, someone will videotape a set where he’s actually playing bagpipes, too.)

It was great to work with Mary Wesley again!

"I hope that you enjoy Frost and Fire as much as I and all my friends do. If you have the opportunity to hear them play live, don’t miss it!" - Gary Apfel